Traditional material characterisation techniques (eg tensile testing) are not always reliable at the nanoscale. True nanoscale sensitivity and the capacity for quantitative analysis are key to understanding the structure and properties of nanoscale components.

The Hysitron TI 950 TriboIndenter equipped with the performech™ advanced control module delivers the force and displacement sensitivity necesary for testing materials and structures with nanoscale precision.

Blue Scientific is the official Nordic distributor for Hysitron in Finland, Denmark, Iceland, Norway and Sweden. If you have any questions or if you’d like a quote, please get in touch:

Ultra-thin films (hundreds of nanometers or less) are an excellent example of a material requiring nanoscale characterisation. In materials development it is essential to understand the relationship between processing parameters, modeling and model confirmation, in order to optimise properties to your requirements. This is relevant in areas including:

Additional in-situ nanomechanical characterisation techniques can further reveal even more information about ultra-thin films. For example, Modulus Mapping analyses the quantitative mechanical properties of the film surface ( to a depth of 1-2 nm). This can overcome the hard film on soft substrate effect often observed in these kinds of films. Other techniques include acoustic emission sensing, nanoscale electrical contact resistance characterisation and fracture toughness measurement. All of these techniques can be performed with Hysitron nanoindentation systems. 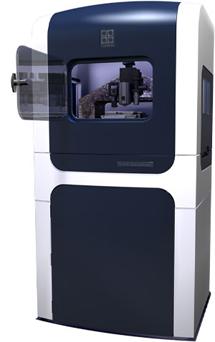 The Hysitron TI 950 TriboIndenter equipped with the performech advanced control module provides the force and displacement sensitivity required to test materials and structures down to the low end of the nanoscale.

More about the instrument…

In this example, constant force nanoscratch tests were conducted on (100) Si and fused quartz. The same nanoscratch transducer and conospherical diamond probe was used for both tests.

The nanoscratch results below reveal subtle but discernable differences in nanoscale tribological behaviour and friction between samples. A stick-slip tribological phenomena is observed for both materials. However the periodicity and amplitudes of respective friction plots from performech tests are noticeably different. There are changes in both friction magnitude and amplitude of the sinusoidal trend during scratches. This suggests the presence of subtle surface inhomogeneities, revealed by the improved lateral noise of performance tests with the performech control module. 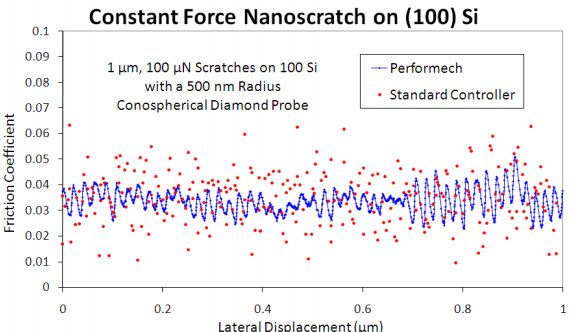 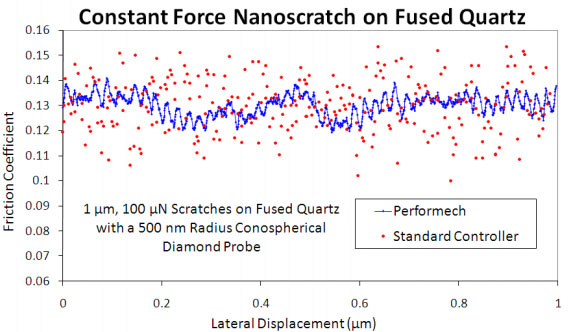 The previous example used constant nanoscratch to show absolute friction magnitudes. Ramping force scratches can also be performed on ultra-thin films. Distinct changes in the force/displacement/friction curve profile caused by delamination or breakthrough are identified as critical events. These can then be quantified for further material characterisation studies.

In this example, ramping force nanoscratch tests were performed on ultra-thin DLC films in hard disk drives. Critical breakthrough and delamination events were pinpointed and quantified. Again, both performech and standard control system data are shown for comparison.

In this example, reciprocating nanowear tests were performed on ultra-thin 50 nm TiN films using the performech. The plots below show friction and normal displacement on a colour scale, versus lateral position and reciprocating scratch segment. They show an event and continued wear of the underlying substrate layer.

The breakthrough event at segment 14 is marked by distinct changes in friction and normal displacement. The probe then continues to wear into the substrate material. 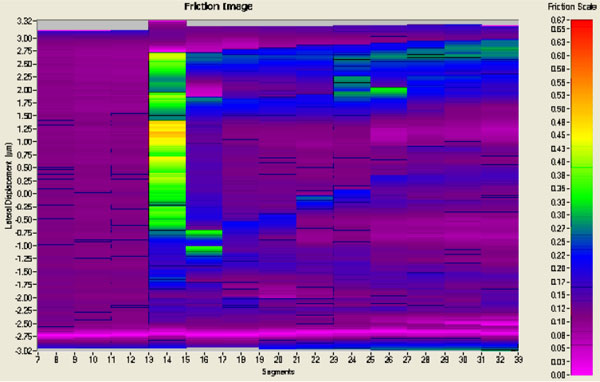 TriboImage plot of friction from a reciprocating nanowear test on ultra-thin TiN film. 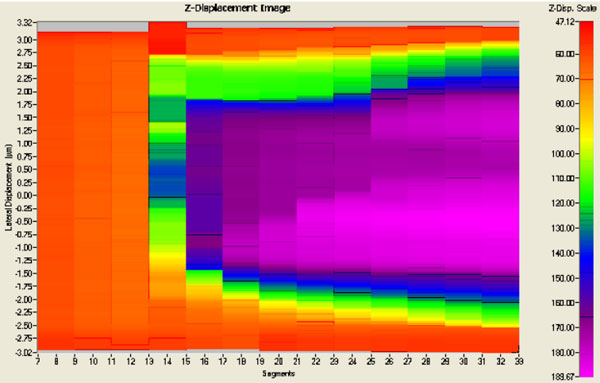 For more information about the Hysitron TI 950 TriboIndenter, please get in touch: