An explanation of the difference between Raman imaging and mapping. The different methods for collecting data and generating images, and their benefits and limitations. Find out what technology and specifications you need to get the best spatial resolution and highest quality results.

Blue Scientific is the official Nordic representative for Renishaw Raman and the InVia spectrometer, which is capable of all the methods in this article. If you have any questions or if you’d like a quote, please get in touch:

What are Raman Images?

Raman images (also known as maps) visually display variations in spectral information at different points on, or inside, a sample. They can be one-dimensional profiles, two-dimensional images or three-dimensional rendered volumes. They are a visual way of quickly seeing how parameters change with position, as well as being a powerful, visual way of displaying your data.

You can display a whole range of parameters, from the intensity of a particular Raman band, or a more complex analysis of the entire spectrum.

There are two main techniques for collecting spectral data to generate images: 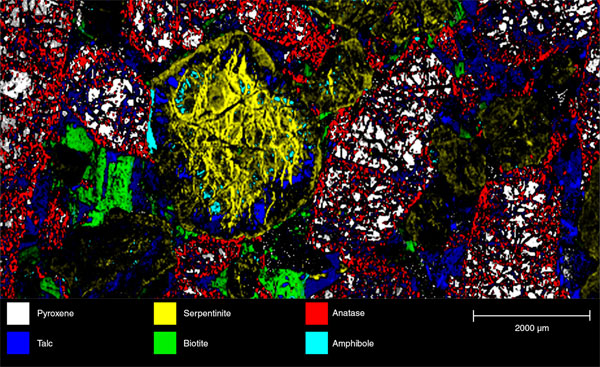 With Raman mapping, a spectral hypercube is collected, rather than a simple intensity image. This means that a Raman spectrum is taken at each position on the sample in a single file. This is then analysed to produce Raman images.

There are several methods, including:

To get the best results from Raman mapping, it’s important to avoid undersampling. With point-by-point mapping in particular, it’s easy to miss parts of the sample if the spacing between acquisition points is larger than the laser spot. Renishaw instruments feature a unique StreamLine™ Slalom mode to avoid this problem.

From Map Data to Images

Once the spectra have been collected, they can be analysed in various ways to produce profiles, images or rendered volumes, including: 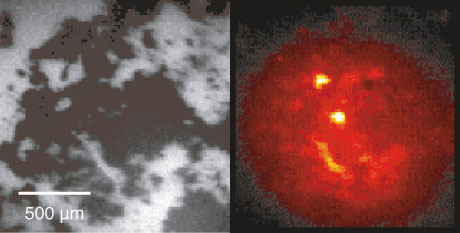 White light and Raman image of a mixture of cocaine and sugar. Taken using fast Raman imaging, the cocaine particles are highlighted as bright spots.

In contrast to Raman mapping, Raman imaging is like taking a photo; Spectral intensity values are collected simultaneously from the whole region of interest. The laser illuminates a square or circular region on the sample. Light is filtered, to record the intensity of just one narrow part of the spectrum.

This limits the information collected to the intensity of the light at that frequency. However, the benefit of this method is that images are faster to acquire. Especially with high power lasers; light is spread over an area, so higher power can be used without causing damage. This also shortens exposure times.

It’s also possible to collect intensity values from multiple points of the spectrum by using multiple and/or tuneable filters.

How to get the Highest Resolution

Spatial resolution is determined by:

With imaging, resolution depends on the magnification optics in the system and the size of the elements in the detector. Ultimately this is limited by the inherent wavelike nature of light, to just under a micrometre.

If you’d like to know more about imaging and what’s possible with the Renishaw InVia, just get in touch: