Micro-XRF spectrometry (µXRF) can be used in heritage science and conservation to analyse historical artefacts. It is a non-destructive analytical technique that provides a wealth of information, including element mapping.

David Dungworth of Historic England used a Bruker M4 TORNADO micro-XRF to image glass from medieval painted windows, to reveal decoration that was otherwise hidden and piece together the original patterns.

Decorated windows have been a feature of English churches for over 1000 years, depicting scenes from the Bible, the lives of saints, royalty, heraldry and benefactors. In some cases the glass remains in its original windows, but more often it has been moved at least once and many windows have been destroyed.

The decoration itself usually survives the years. However, when archaeologists find the glass fragments at excavations, the glass is often corroded and the patterns and illustrations are not visible. This makes it difficult or impossible to reconstruct the windows and identify the decorations. 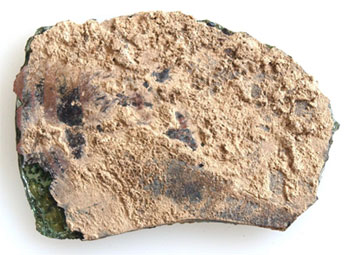 On many fragments the decoration is completely obscured.

A collection of medieval window glass was recently donated to Historic England, who are using micro-XRF to reveal its hidden decoration. There are over 1000 fragments of glass, generally in poor condition. Some fragments are so corroded that they are completely opaque. Others are covered by a layer of mortar, completely hiding the decoration.

Historic England tried various X-ray techniques to analyse the glass. Traditionally X-radiography is used, which worked in some cases. Backscattered X-radiography was also tried, but as the examples show, there was much greater success with micro-XRF.

Comparison of techniques used to examine the glass fragments

X-ray fluorescence reveals information about the chemical composition of materials, by micro-focussing an X-ray beam on a tiny spot (0.02mm). Using an integrated motorised platform, the surfaces of objects can be scanned, mapping the distribution of various elements.

Paint has a different elemental composition to the underlying glass. The high levels of iron and lead produce a clear micro-XRF image, revealing the original painting.

So far over 200 fragments from the collection have been scanned using micro-XRF. The scans show that the painted designs on many are closely related, making it possible to reconstruct the original designs and identify the subjects. Identifying the types of paints and pigments also helps to date the fragments.

Common borders and patterns can be seen clearly in the micro-XRF images. For example, the curved lines, known as grisaille, and cross-hatching were popular in the first half of the 13th century. Similar designs have been found  on glass from York Minster, Salisbury Cathedral and Battle Abbey.

Several glass fragments were found to be decorated with letters. The Lombardic style of font was used until the late 13th century. Closer examination of the lettering revealed that it was created by two different glass painters, and also suggested how it was formed, by scraping away paint.

Other fragments show a seated figure and hand, a face and the battlements of a castle. 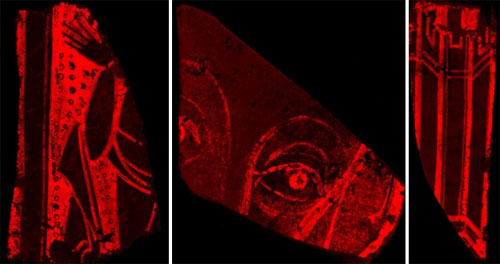 It is believed that the glass is from the windows of a Benedictine monastery at Alcester Abbey, which was founded in the late 1130s.

As well as these applications in heritage science and conservation, the technique has an extremely varied range of uses, in fields including materials science, forensics, microelectronics and even life science.

If you have any questions about micro-XRF as an imaging technique or whether it would be useful for your research, please contact us.