Reliable testing and diagnostic methods are important in the development of new battery technologies, for both portable devices and automotives. EIS (Electrochemical Impedance Spectroscopy) is an accurate analytical technique for measuring critical battery parameters, including:

EIS impedance analysis can be used to improve the accuracy and reliability of battery management and battery testing. Reduce the number of false positive results, resulting in cost savings and fewer unnecessary battery warranty returns.

Blue Scientific is the official UK distributor of EIS instruments from Solartron Analytical (Ametek). If you have any questions, or would like a quote or demonstration, please get in touch.

With traditional time domain techniques (eg Cyclic Voltammetry, Current Interrupt), the cell is polarised to a specified voltage or current and the response of the cell is recorded as a function of time. The response is a composite of all electrochemical processes, so data analysis is complex, especially for black box devices such as batteries, fuel cells and supercapacitors.

A key benefit of EIS is the ability to separate processes in the frequency domain. Changing the measurement frequency deconvolves electrochemical processes. For example, applying a small AC sinusoidal wave to a battery at high frequencies measures only the ESR (equivalent series resistance) and inductance of the cell. At high to mid-frequency, electrode reactions dominate the spectra. At lower frequencies, the AC input stimulates long time constant processes such as migration and diffusion. Models based upon passive circuit elements such as capacitors/resistors/inductors can faithfully simulate the internal electrical properties of the cell. These can then be used to fit real time data, for improved diagnostics.

False positive readings are a common problem in the automotive and consumer electronics industries.

A manufacturer of portable devices was suffering > 30% warranty returns as a result of suspected Li-Ion battery failure. Existing test methods were not adequately detecting working batteries and failures. They estimated cost savings in the region of 2 million Euros a year in warranty repairs, if they could develop more accurate test method, with fewer false positive results. There was also concern about the damage to the company’s reputation, with the high number of warranty returns. EIS was implemented into the testing regime and immediately highlighted quality control issues. It is now used routinely as part of incoming goods inspection.

State of Charge (SoC) is the lifetime of the battery between charges. It is an important parrameter for providing information to users about the anticipated battery usage at current discharge rates.

The most common method of measuring the State of Charge is Coulomb Counting. The amount of charge used is calculated and compared with the C-rating or capacity of the battery. While this method is suitable for new batteries, as the battery ages it becomes less accurate. 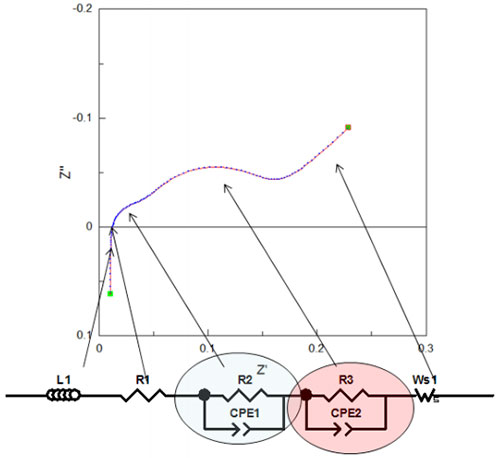 EIS results in Nyquist form from a Li-Ion battery at 100% SoC. The equivalent circuit model is used to simulate the EIS response of the cell. The circuit elements corresponding to the features in the EIS plots are shown. The data is modelled in the industry standard analysis platform ZVIEW. R2 is the charge transfer resistance – Rct and R3 is the Solid Electrolyte Interface Impedance (RSEI)

Using EIS, the state of charge is first measured at predefined levels. This can be either at the open circuit voltage of the cell or under real-world constant load conditions. The data is then fitted to an equivalent circuit model. By measuring the full frequency response of the battery and then applying an auto-fit routine to the data, it is possible to automatically determine the two resistance values from the equivalent circuit model and compare with a look-up table to determine the state of charge. 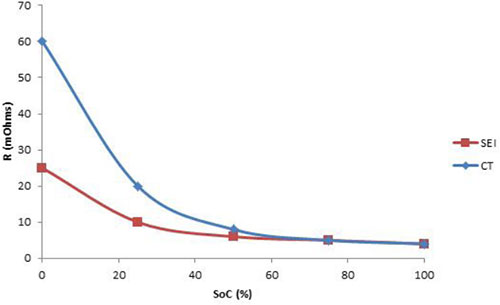 Impedance values of circuit elements RCT and RSEI as a function of SoC. Both values increase with decreasing SoC.

EIS can also be used to determine faults in cell packs. This is particularly useful in EV applications, where the battery unit consists of many repeat cells.

When batteries approach their end of life, the OCV (open circuit voltage) may still be similar to a new battery. This means that voltage monitoring does not always highlight faults. The series resistance does not always change over time, so current interrupt measurements are not always useful either.

EIS overcomes these limitations because it measures the entire electrochemical properties of the cell using a broadband frequency stimulus. The figure below shows the EIS response of 3 simple Ni-HM cells connected in parallel. This clearly shows  2 cells have a low impedance, and the third (red) has values double the others. The cell voltage for all three is approximately the same (within 2mV). The third cell is limiting the current (power) that the system can produce and needs to be removed. The same method can be used by engineers for battery modules, to quickly identify packs with high impedance cells, for removal.

Estimating how much an application will reduce the battery’s lifetime is also important in battery management and diagnostics. The State of Health (SoH) can be difficult to determine.

Combining EIS with fuzzy logic is a way to determine the state of health of Li batteries. A range of algorithms have been developed that determine the SoH of different cell chemistries. In some cases, specific models apply to different battery types.

SoH (%) plotted against ESR (series resistance), as determined by analysing the high
frequency intercept from the complex plane / Nyquist plots.

In this example, the SoH was determined using EIS for a Lithium Manganese Nickel Cobalt Oxide (LiMNCOs) cell. The cells were discharged at their C rate and EIS spectra were recorded periodically. The spectra were then fitted to an equivalent circuit model. The SoH shows a clear relationship with the cell’s series resistance.

Research is currently under way to develop algorithms that compare the SoC, SoH and cell temperature. These values are all related, and with knowledge of two, it may be possible to predict the third. This is particularly relevant in the automotive industry, where batteries operate at different temperatures.