Unambiguously identify organic nano-contaminants on wafers, media and slider substrates. In addition to this you can also acquire mechanical, thermal and structural property information with nanoscale spatial resolution.

Organic nano-contaminants are a well-known cause of defects in micro-electronics manufacturing, including semiconductors, data storage devices and LEDs. They can cause yield issues, manufacturing delays and even scrap products.

Contamination can come from many sources, including chemical processing, cleaning, airborne molecular contamination, wafer transfer / handling and manual interaction. Accurate identification is key to tackling the problem. However, particularly in the case of organic nano-contaminants, identification is often ambiguous because of insufficient resolution and even sample damage during analysis.

With AFM-IR you can identify contaminants unambiguously, with precise, reliable data and standard FT-IR databases. In addition to this, you also can also analyse multiple properties with nanoscale resolution. 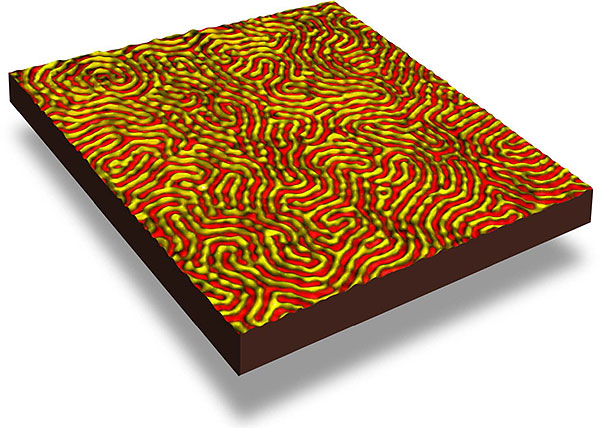 The spectra acquired from AFM-IR correlate directly with traditional FTIR spectra, so you can use standard FTIR libraries. As well as chemical analysis data, you also have access to mechanical, electrical, thermal and structural property information – all at nanoscale spatial resolution.

The nanoIR3 is a nanoscale FTIR, chemical imaging and materials characterisation platform ideal for studying:

Example: Nano-Contamination on a Silicon Wafer

In this example, contaminated silicon wafers were prepared using materials from semiconductor manufacturing environments. Tapping AFM-IR imaging was then used to locate the contamination, followed by AFM-IR for identification.

The AFM height image below shows the thickness variation (20-100nm) of the contaminant residue on the wafer. AFM-IR spectra were then acquired from points with variable thickness. As you would expect, the IR intensities vary with the sample thickness. However, the overall signal to noise ratio is sufficient to identify the material accurately as human skin tissue. The sensitivity of AFM-IR makes it possible to analyse thin samples; here the contamination could be identified even at 20nm thickness.

Unique FASTspectra technology rapidly acquires spectra over the full IR tuning range. This reduces acquisition time by a factor of 10, while still maintaining a high level of accuracy.

In the example below, ~30 nm tall contamination residue was measured with the nanoIR3. The AFM-IR spectra below were matched to commonly used FTIR database (KnowItAll from Bio-Rad Inc.). The residue was identified as polyethylene terephthalate (PET), which is typically used in polyester fabrics. FASTspectra data was used for this identification, demonstrating the high level of accuracy even with the fast acquisition.

PET contamination on a silicon wafer: (a) AFM height image; (b) FASTspectra data on (red) and off (blue) the contaminated area; (c) The contaminant is positively identified as PET, using an FTIR database.

The Bruker Anasys nanoIR3 is a nanoscale IR spectrometer, ideal for identifying nanoscale organic contaminants in semiconductor fabrication, and in other electronic devices. 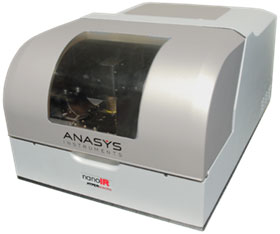 Blue Scientific is the official Nordic distributor of Bruker Anasys instruments. For more information, demonstrations or quotes please get in touch.

Information about this application is also available in an application note from Bruker Anasys.