Corrosion is an electrochemical reaction involving metal oxidisation and thus moves from a solid to a liquid (ionic) state resulting in the solid sample losing mass. Billions are spent every year combating the effects of corrosion, which affects a range of industries including oil, aircraft, shipping, the military, engineering, automotive and even biomaterials with medical stints and joint replacements.

We offer a range of potentiostats, electrochemical instruments and accessories for studying corrosion. These include potentiostats and galvanostats for measuring corrosion rates, corrosion cells for experimenting with coupons and scanning systems for quantative and qualitative analysis.

Blue Scientific is the official distributor for potentiostats from Princeton Applied Research and Solartron Analytical (Ametek) in the UK and Ireland. If you have any questions, or would like a quote or demonstration, please get in touch:

View the complete range of potentiostats

Salt spray / coupon tests are often used to study corrosion. With these methods, results take months to acquire. No information is provided about time-varying effects. In comparison, electrochemical testing with potentio-dynamic and galvano-dynamic techniques provides accurate data within a much shorter time. For example, the performance of coatings and corrosion inhibitors can be monitored in real time.

These electrochemical techniques are commonly used in corrosion applications: 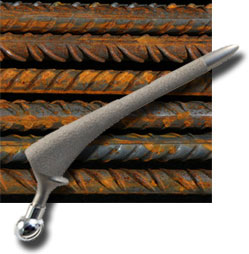 PARSTAT 2273 potentiostat/galvanostat delivers 100 Volts of compliance voltage.  Compliance voltage affects how much power can be output to control the cell.  Resistive electrolytes, which are sometimes found in corrosion (eg oil, concrete, soil) can require a potentiostat with a high compliance to overcome the resistive environment. 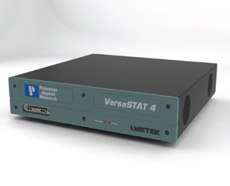 VersaSTAT 4 potentiostat/galvanostat has additional low current ranges and bandwidth filters compared to the VersaSTAT 3. Corrosion currents can be very low. This is important as small currents equate to a low corrosion rate, but can also be more difficult to measure. Even with moderate current-densities, small electrodes  may also generate small current. Corrosion samples can also have high capacitance due to their size, as well as oxidising coatings.  The additional filtering and ranges in the VersaSTAT 4 offer more hardware options, so you can use the best configuration for your sample.

VersaSCAN Electrochemical Scanning System – Gain local information about the electrochemical events on the surface of your sample. This is particularly useful as corrosion is often a non-uniform aggressive process, such as pitting. The VersaSCAN is a modular system, with a scanning base that can be combined with components for various techniques: 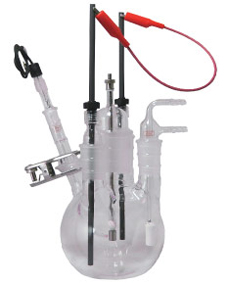 K0235 Flat Cell – For flat samples of various sizes, exposing only a specific area for each experiment.

All PAR potentiostats can also function as galvanostats. A galvanostat applies the signal as a current and measures the response of voltage. In corrosion, this is used for tests such as Galvanostatic LPR. This is useful in continual monitoring tests where the reference electrode is susceptible to bubbles, such as in oil. Bubbles still create a bad data points, but there is no loss of control of the cell, as with potentiostatic control.

All Princeton Applied Research potentiostats can also function as a zero resistance ammeter (ZRA). This does not apply a signal, but passively measures both the current and voltage as a response.  ZRA mode is particularly useful when investigating galvanic corrosion and electrochemical noise:

In the galvanic corrosion experiment the metals are dissimilar; in electrochemical noise they are the same.

All Solartron Analytical potentiostats offer grounded or floating operation, so you can run experiments in autoclaves and on grounded pipelines without ground loop issues, in addition to conventional bench top experiments.

Lower cost potentiostats are also available, including Model 1285 for DC only tests and Model 1280C.

Multiplexers are also available as options for the above systems. These can be added at any time to increase throughput when evaluating inhibitors and coatings.

ModuLab series – High compliance and polarisation voltage up to 100V, for low conductivity environments, together with extreme low current femto ammeter measurement if required. Test extremely resistive materials and coatings with sufficient drive voltage and sensitive current measurement. The ModuLab ECS system can perform harmonic measurements to investigate non-linear phenomena seen in corrosion measurements. In addition, purely passive techniques such as electrochemical noise using a ZRA zero resistance ammeter can be performed across the full frequency range of the system. As with all Solartron potentiostats, the Modulab can also be used in floating mode for challenging experiments where the sample is directly or indirectly connected to ground. More details in this flyer…

Blue Scientific is the official distributor for potentiostats from Princeton Applied Research and Solartron Analytical (Ametek) in the UK and Ireland. If you have any questions, or would like a quote or demonstration, please get in touch:

View the complete range of potentiostats 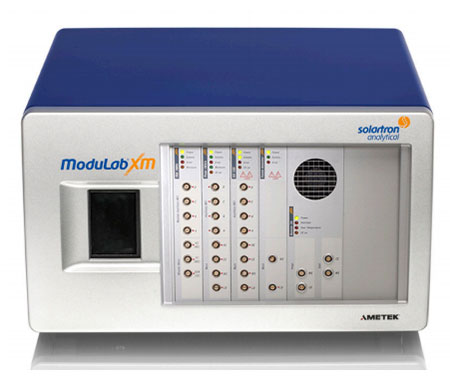