How is Sliding Friction affected by Surface Texture?

The amount of sliding friction between two surfaces is affected by a number of factors, one of the most obvious being surface texture. But how exactly does the roughness or smoothness of a surface affect its sliding friction? And what about different situations, such as elastic deformation?

Donald K. Cohen PhD has published an interesting article about the effect of surface texture on sliding friction. The results may surprise you!

Friction can be measured using the Bruker UMT TriboLab, a mechanical and tribology testing system. Blue Scientific is the official UK and Nordic distributor; for more information or quotes, please get in touch:

The relationship between surface texture and friction between two dry sliding surfaces is more complex than it first appears. It’s linked to the idea of the “real area of contact”, described here:

…putting two solids together is rather like turning Switzerland upside down and standing it on Austria – their area of intimate contact will be small.
Frank Phillip Bowden, 1950

Bowden was a pioneer in the field of tribology. His work with Taylor explored the theory that dry sliding friction is caused by shearing at junctions formed at regions of contact, known as the real area of contact, between the sliding surfaces.

Depending on the type of roughness and the materials’ properties, the real area of contact does not necessarily depend on the average surface roughness. Making a surface rougher or smoother may not always affect the sliding friction.

In addition to this, for certain textures and materials, making a surface smoother reduces friction. But elsewhere, rougher surfaces can actually have less friction. Donald K. Cohen’s article explains this in more detail, with calculations and examples.

3D surface texture measurement of a sliding surface:
A – Initially the surface was rough, resulting in plastic deformation/plowing.
B – The surface stabilised to an elastic regime of contact.
C – Finally, the surface became polished, resulting in a larger real area of contact and higher friction.

The article discusses how to reduce friction, and how various textures affect the amount of sliding friction, for different types of surfaces:

Friction between sliding surfaces can be measured with the UMT TriboLab, a mechanical tester from Bruker. The system has various modules to simulate different friction systems. You can measure friction forces (or coefficients) as a function of various conditions including load, distance traveled and degree of lubrication.

More about the UMT TriboLab… 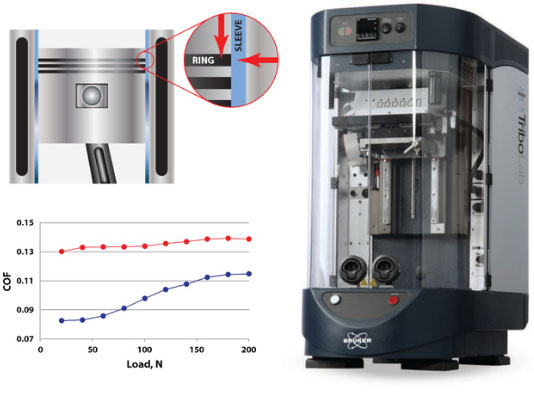 Measuring friction with the Bruker UMT TriboLab. Friction vs load can be measured with a ring on cylinder test. The red and blue lines represent different lubricants.

You can read the full article by Donald K. Cohen in Quality magazine, which is available online (no registration or fee required). Quality magazine is a publication for the quality assurance industry, focussing on metrologiy, statistical analysis and proces simprovement.

Donald K. Cohen is a managing member of Michigan Metrology LLC and a consultant to Bruker, who developed the UMT TriboLab.

Excerpt from a lecture by Dr. Donald K. Cohen