The ModuLab XM PhotoEchem is an optical and electrical measurement system, originally designed for studying dye sensitised solar cells (DSSC). It can also be used to analyse other types of solar cells, including the new generation of hybrid organic-inorganic lead halide based perovskite photovoltaics, which have high solar power conversion efficiency.

Blue Scientific is the exclusive distributor for Solartron Analytical electrochemical testing systems in the UK and Ireland. If you would like more information, advice or quotes, please get in touch:

A range of measurements can be performed on solar and photo-electrochemical cells using the PhotoEchem:

This post summarises each technique. Full details, with example experiments and results are available in an application note from Solartron Analytical.

Impedance spectroscopy is a small amplitude measurement technique, in which a sinusoidal voltage or current is applied to the system under study. Generally, the response of systems such as solar cells is non-linear. This means that the amplitude of the perturbing signal has to be kept small enough so the output signal can be described using linear terms, in a series expansion of the system response. In this case, the system can be represented using linear R, C circuit elements. 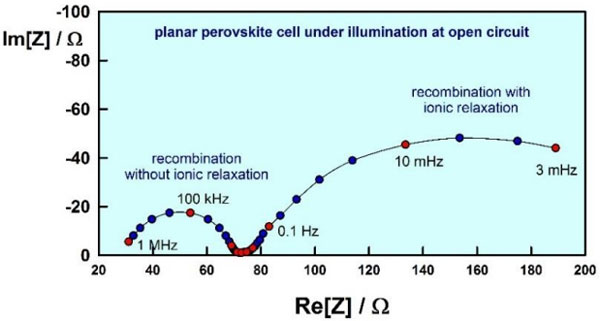 IMPS and IMVS are used widely in the characterisation of electron transport and back reaction in mesoscopic dye sensitised solar cells. IMPS was originally developed to study photo-electrochemical reactions at the semiconductor / electrolyte interface. It has also been used to research the kinetics of light-driven water splitting reactions at semiconductor photoelectrodes. Both methods can also be used for other types of solar cells, and they both complement conventional impedance spectroscopy. 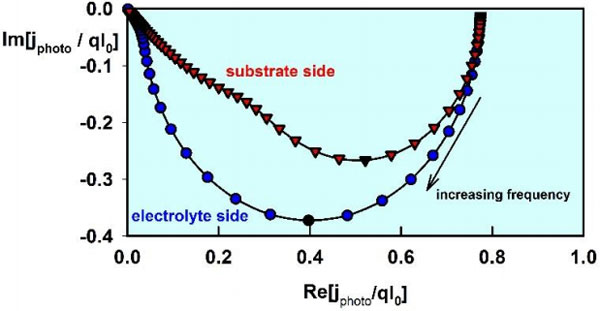 IMPS responses for a DSSC, comparing illumination through the conducting glass substrate and through the electrolyte side.

The previous methods all use small amplitude perturbations to linearise system response in the frequency domain. Linearisation is obviously convenient when you are modelling a system in terms of linear circuit elements (resistors and capacitors). However, to fully characterise a non-linear system such as a solar cell, measurements need to be repeated at various dc potentials or dc illumination intensities.

An alternative technique, also possible with the Modulab XM PhotoEchem, is to apply a large amplitude perturbation (voltage, current or illumination) and measure the system response in the time domain.

This method was originally developed for conventional silicon solar cells, where under certain conditions the voltage decay gives information about the minority carrier lifetime, typically in the microsecond region. It has also been found to provide valuable information about DSSCs and hybrid perovskite solar cells. 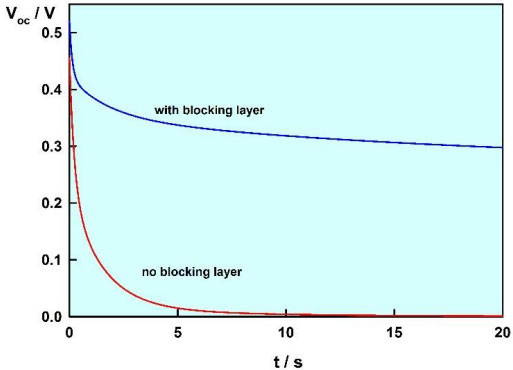 Open circuit voltage decay of DSSCs with and without a compact TiO2
blocking layer to prevent back reaction of electrons with tri-iodide ions in the
electrolyte occurring via the conducting glass substrate (shunting).

The high concentrations of trapped electrons in DSSCs (up to 1019 cm-3) can be measured using an analytical method called charge extraction. This involves illuminating the cell at open circuit to fill the traps below the quasi-Fermi level, which corresponds to the open circuit voltage. The illumination is then switched off and the voltage decays for a set time. The cell is then short circuited and electrons flow into the external circuit. The current ‘spike’ caused by the release of the trapped electrons is integrated over a suitable period (usually tens of seconds) to determine the trapped charge: 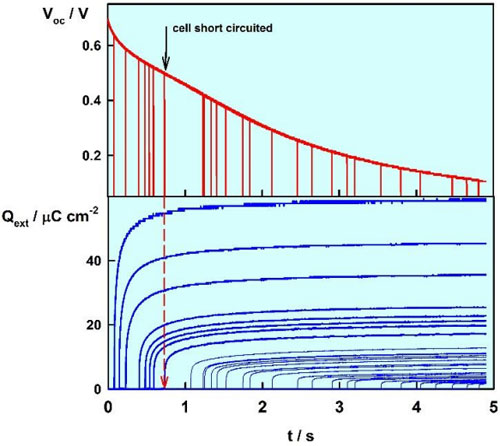 DSSC charge extraction plots. The upper set of traces shows a series of open circuit voltage decays, interrupted at different times by short circuiting the cell. The lower traces show corresponding integrated current ‘spikes’. These give the extracted charge as a function of the open circuit voltage at the point at which the cell is short circuited. The arrow shows how the charge extraction plot builds up immediately after short circuiting the cell.

The experiment is then repeated with progressively longer decay times, to obtain the trapped electron concentration as a function of open circuit voltage, and hence of the quasi Fermi level position. The extracted charge is then plotted as a function of the open circuit voltage at which the cell was short circuited. The charge can then be converted into an electron concentration, using the known thickness and porosity of the mesoporous titania layer.

More information about these techniques, including detailed examples and results, is available in an application note from Solartron Analytical. If you have any questions about how they could work for your research, of if you would like a quote for the Modulab XM PhotoEchem, please contact us: 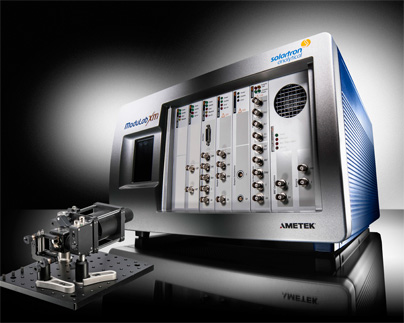