Testing Thin Films and Coatings with the Bruker UMT TriboLab

Testing Thin Films and Coatings with the Bruker UMT TriboLab

Blue Scientific is the official distributor of Bruker tribology instruments in the Nordic region (Norway, Sweden, Finland and Denmark). If you have any questions or would like a quote, please get in touch:

More about the UMT TriboLab

What Can You Test?

Perform a wide variety of  nano and micro mechanical tests on practically any type of thin film or coating, including metals, ceramics, composites, polymers and more. Test materials for semiconductors, solar panels, displays and LEDs. If you are unsure whether the TriboLab would be suitable for your area of work, please get in touch.

Nanoindentation in Optoelectronics and Ceramics

Multi-phase and porous ceramic materials are used as passive semiconductors in optoelectronic devices. Pre-screening critical parts for subsurface defects before assembly can prevent failure in the field. Using nanoindentation, the shapes of loading–unloading curves can indicate sub-surface cracks and defects caused by material porosity and inelastic behaviour:

In this example, micro-scratch-hardness tests were performed on two samples using a diamond stylus with a tip radius of 5μm. The test was conducted with reference to ASTM standards. The test used a diamond stylus and an acoustic emission sensor, to monitor the high-frequency signal generated during scratching, indicating the intensity of the fracture.

The scratch width was then measured using an AFM head, and AFM images of the scratches were taken:

The table below shows the mean coefficient of friction (COF) and acoustic emission (AE) values for both samples, along with the scratch width (W) and scratch hardness:

Similar to scratch-hardness testing, scratch adhesion tests use a micro-indenter or a micro-blade, sliding and a linearly increasing load. The failure of the coating is characterised by a sudden change in coefficient of friction (COF) or contact acoustic emission (AE). The adhesion strength of the coating or thin film is characterised by the load at which COF and AE exhibit a sudden change.

In this example, scratch-adhesion tests were performed using a diamond stylus with a 12.5μm tip radius. The sliding speed was 0.5mm/s over a distance of 10mm on a patterned LCD display with a coating layer sequence of indium-tin-oxide/ overcoat/matrix on a glass substrate. At the point of failure at a load of around 16mN, both COF and AE increased. The periodic bumps in the COF and Fz plot were due to the rapid interaction of the diamond tip with the patterned top surface of the specimen. 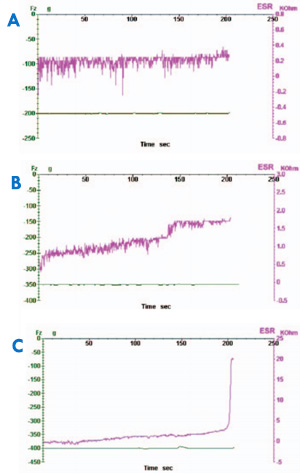 Example wear test data: A – at 2N the coating is not broken; B – at 3.5N the coating starts to break; C – at 4N the coating breaks but does not completely cut through.

A series of runs is performed with progressively increasing normal loads, until coating failure was observed. The critical load characterising the coating scratch resistance is defined as the minimum load required to break through the coating completely. 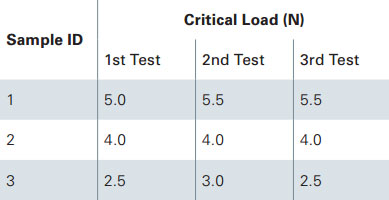 In wear testing, the indenter is stationary, with sample stage reciprocating to cause coating wear. A constant load for the wear test can be chosen according to the results of the scratch test, and the critical load required for coating failure. The goal is to determine a load that will stress the material without breaking through straight away.

After the load is applied, the sample is cycled in a reciprocating motion until the coating wears through. Coating wear resistance is defined as the minimum number of cycles required to wear the coating through completely. 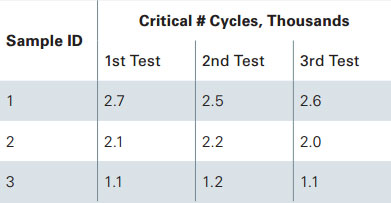 The wear-resistance of monolithic materials can be improved with diamond-like carbon (DLC) thin films. DLC thin films are used in rigid discs and microelectronic-mechanical systems (MEMS) as protective coatings for wear-resistance in light load and high velocity conditions.

All of these tests and more can be performed with the Bruker UMT TriboLab. The system is modular, so drive stages and sensors can be swapped easily to reconfigure the instrument for different tests.

Full details of the example tests mentioned here are available in this application note from Bruker.

More about the UMT TriboLab